Phoenotopia 2 is the as-of-yet unnamed sequel to Phoenotopia: Awakening. More info to be added later.

Phoenotopia 2 was originally briefly developed alongside the first game's remake, Phoenotopia: Awakening. A few things such as the art style, basic physics system, and dialogue system were implemented. Due to the fact that Quells' skills would improve over time while working on these games, it was deemed preferable that the sequel came out after the remake. This also allowed the remake to set a more solid foundation upon which the sequel can stand. Development focused on Awakening.[1] On March 1st, 2021, it was announced that Phoenotopia 2 would not be the next priority after Phoenotopia: Awakening. The game may be developed and released after Cape Cosmic's next project.

From a high place, Gale spies a knot of toads. Yum.

The underground city of the Rabols - A tentatively named alien race.[2]
Add a photo to this gallery
Concept Art by Thùy 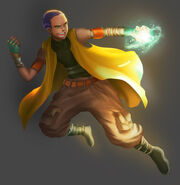 Gale sketches
Add a photo to this gallery
In-Game Sprites

Retrieved from "https://phoenotopia.fandom.com/wiki/Phoenotopia_2?oldid=6863"
Community content is available under CC-BY-SA unless otherwise noted.